How to braai chicken 101: The all-you-need cheat sheet

Does the thought of someone bringing pieces of chicken to your braai make you break out in a cold sweat? If you’re not a seasoned braaimaster, this might be you – because cooking chicken over the coals isn’t necessarily super straightforward.

Of all the meats, chicken generally takes the longest to cook on the braai and, unlike a cut of beef or venison, it needs to be cooked all the way through before eating. The ideal internal temperature of the chicken should be 75°C. If you don’t have a meat thermometer lying around (who does at a casual braai?), then carry on reading… because there’s another way to test it.

Here are a few things to remember the next time you’re faced with a cling-wrapped pack of lemon-and-herb chicken thighs. 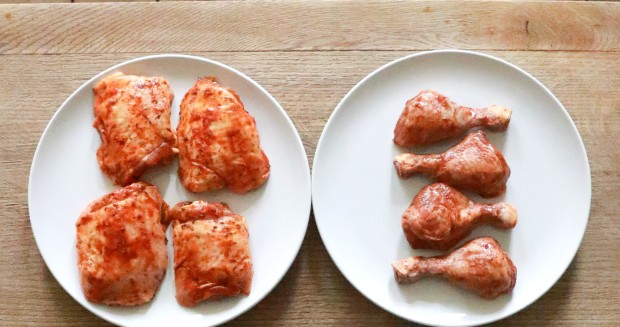 1. The temperature of the raw chicken

It might sound like common sense, but always have your chicken at room temperature before starting to braai it. Taking it straight from the fridge is a no-no. Why? The closer it is to its final eating temperature, the more evenly it will cook.

2. The temperature of the heat source (aka the coals)

This is probably the most crucial point that many enthusiastic braaiers get wrong. The coals for braaing chicken should be a moderate heat. (Hold your open hand above the grid to feel the heat – if you can’t keep your hand there for a full 10 seconds, you know it’s still too hot). Otherwise the outside of the chicken will burn while the inside will remain raw.

3. The size and shape of the chicken

It might seem obvious but chicken portions have different sizes and thicknesses, which means that cooking times will vary. For instance, a thick breast on the bone will take much longer than a few wings. If you find yourself having trouble with this, perhaps consider braaing chicken kebabs, as they will generally cook evenly and won’t stress you out.

Have you ever seen a rotisserie at work? It turns ever so slowly, while evenly and gently cooking the meat. Braaiing chicken should be done using a similar concept – the meat should be continuously turned so that each part of the chicken gets a bit of that gentle, moderate heat. This also allows the skin to evenly crisp up without getting burnt.

Tip: Meat (or poultry) with the bone in will offer more flavour, but bones are poor conductors of heat so these pieces will take a little longer to cook.

5. The age-old question – how to know if the chicken is done?

Pierce the chicken at its thickest part with a sharp knife and wait for the juices to run clear. Remove it from the heat immediately to avoid the meat from going dry, as it will carry on cooking a bit from the residual heat.

Lastly: If you’re really concerned that your chicken won’t be cooked when you take it off the braai, you might want to par-cook it in the oven or steam it lightly beforehand and then finish it off on the braai – allowing it to still get that charry texture and smoky braai flavour.

Now it’s time to practise! Try this recipe at your braai this weekend… 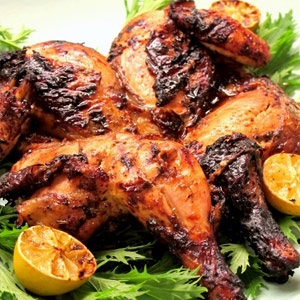 Combine all the marinate ingredients in a large bowl.
Smother the chicken in the marinate, making sure to work the sauce in between the skin and the flesh. Cover with cling film and store in the fridge for as long as possible – at least 4 hours, but preferably overnight.

Remove the chicken from the fridge at least half an hour before cooking.
Cook the chicken on your braai/BBQ over a medium heat for 35 to 40 minutes, turning every 10 minutes or so. Baste the chicken with the remaining marinate as it cooks.

Cut the limes in half and place flesh side down onto the braai/BBQ. Cook for about 15 minutes or until the limes are soft and the flesh slightly charred.
Just before serving, squeeze the cooked limes over the chicken.

News: Beware of accepting your SARS auto-assessment without checking it

Cele: We are under attack

President Ramaphosa promises Covid-19 vaccines to everybody in SA