19-year-old Lara van Niekerk solidified her status as South African swimming’s new superstar on Tuesday night with a stunning performance in the 100m breaststroke and another Commonwealth Games gold medal.

It was a wonderful victory for the Pretoria-based teenager who has won the hearts of South African sports fans over the last few days in Birmingham.

Lara won gold in the 50m breaststroke on Sunday and then backed it up with a masterclass in the 100m that saw her finish in 1:05.47, comfortably ahead of team-mate and South Africa’s 2021 Tokyo Olympics hero Tatjana Schoenmaker (1:06.68) in second.

As the two South Africans embraced in the pool, visibly overcome with emotion, South Africa celebrated one of its proudest moments in Commonwealth Games history.

With Schoenmaker having won the 200m breaststroke gold – Kaylene Corbett also won bronze in that event – South Africa’s women are Commonwealth champions in all of the 50m, 100m, and 200m breaststroke distances.

“I’m still speechless. It doesn’t feel like I’m a double Commonwealth Games champion. I don’t think it’s ever going to sink in,” said Van Niekerk shortly after the race.

Eugene da Ponte, Van Niekerk’s coach, told Sport24 immediately after the festival of South African medals that the feeling had also yet to sink in for them.

“I don’t think everything has sunk in yet but I’m pretty proud and I suppose happy is a bit of an understatement. I’m still a little shellshocked, I think,” he said from Birmingham.

“The time we spent in Europe in the last two months and going to the World Championships and all of that, it contributed. She was pretty calm before the race,” Da Ponte said.

“It helped to have Tatjana and Kaylene in the same race as her. It felt more like something she’s used to doing.

“There’s an incredible bond with the team this year. I’ve never been to the Commonwealth Games before but the bond that’s grown between everyone on the team this last 10 days is amazing.

“They’re cheering for each other every night. As emotional as Tatjana and Kaylene got when they shared the podium the other night, it was the same today (Tuesday).

“It’s a point of pride for the squad to have such a strong breaststroke squad for the country and to do the country proud.”

It has been a decade since Chad le Clos stunned Michael Phelps at the 2012 London Olympics, and he is arguably the greatest swimmer this country has ever produced.

With 18 Commonwealth Games medals to his name, Le Clos was desperate to finish on the podium in the 100m butterfly and make history by becoming the first athlete to get to 19. It was not to be.

Le Clos came home in 4th place and had to face the disappointment of his team finishing fourth after failing to hang onto third place in the mixed 4x100m medley relay final soon after. 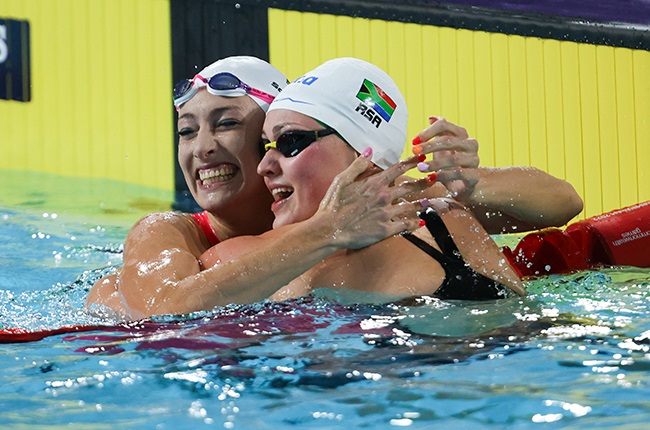 “The whole of South Africa will celebrate this and it’s just fantastic to see two of our swimmers on top,” Penny Heyns, South African breaststroke legend and three-time Olympic medallist, told Sport24 on Tuesday night.

“I’m really excited for Lara, and I think the best for her is yet to come. She has been improving all the time and the more she competes at this level, the better she is going to get.

“It was also a fantastic swim from Tatjana, especially coming off the back of the 200m. Our whole team, in fact, has put up a really good performance and South African swimming is in a good place at the moment.”