The Helen Suzman Foundation (HSF) is taking legal action against the government’s implementation of lockdown regulations, slamming the president and his chosen ministers for ‘an oversight of Parliament’, The South African reported.

The group is pursuing the courts, with a specific focus on removing the ‘ultimate authority’ enjoyed by Nkosazana Dlamini-Zuma. 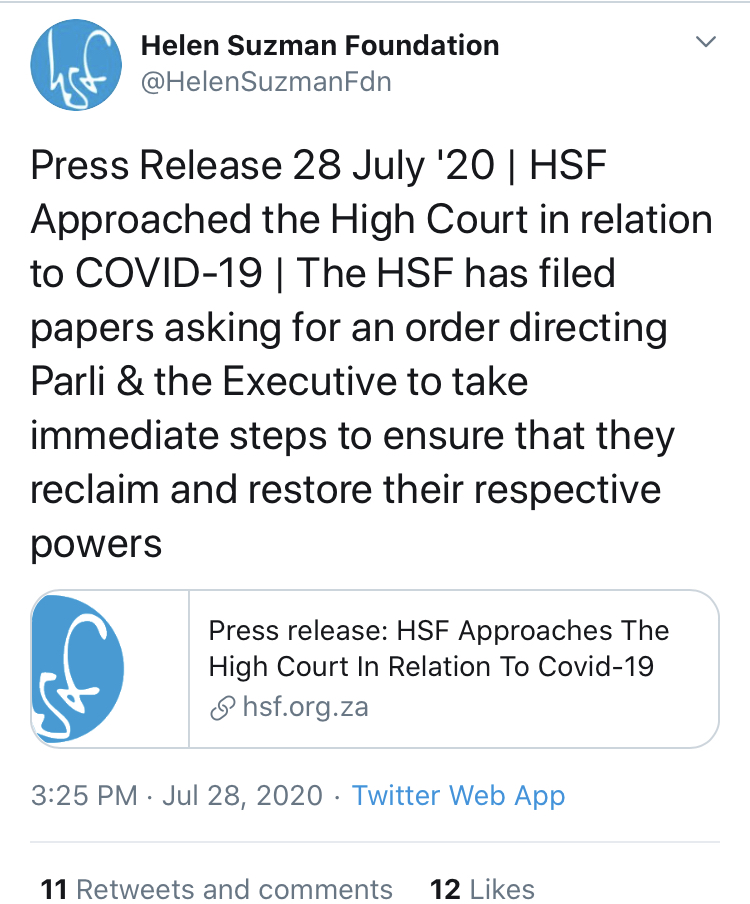 HSF issued a press release on Tuesday afternoon, revealing that they would give Cabinet until mid-August to respond. However, they plan to have this case heard in court within one month, scheduling Tuesday 25 August as their preferred date for a legal showdown.

According to the foundation, the past four months of lockdown saw legislation and restrictions approved solely by the National Coronavirus Command Council (NCCC) – in direct contradiction of the Constitution.

Parliament has had very little say on how Ramaphosa and his team must navigate this public health crisis.

Similar issues have been raised in previous legal battles related to the lockdown, but HSF is specifically asking for ‘a restoration of power’ to the National Assembly:

“The Disaster Management Act vests extraordinarily wide-ranging legislative and executive powers in the Minister of Cooperative Governance and Traditional Affairs [Nkosazana Dlamini-Zuma], to deal with issues arising out of disasters.”

“For four months, the government has permitted the Minister, alone or with the National Coronavirus Command Council, to legislate the state’s response to COVID-19. They appear content to allow their ultimate authority to be exercised by others, seemingly for as long as COVID-19 poses a threat.”

“We desire a restoration of power to Parliament and the Executive, functioning as each is required by the Constitution. No explicit attack is made on the policy choices or value judgments embodied in existing regulations. The application only seeks to restore the primacy of our Constitutional dispensation.” Helen Suzman Foundation

Ramaphosa has denied his regulations were hijacked by the minister, but much of the damage had been done right there and then. Dlamini-Zuma, who leads the NCCC, is also believed to be influencing Cabinet on issues such as alcohol and exercise restrictions. The government, meanwhile, has been given two weeks to file a responding affidavit to the Foundation’s case.

Countdown to Covid Vaccine in SA