Heineken SA will cut 70 more jobs and put new investments on hold in the country due to the significant impact of bans on alcohol sales and Covid-19 trading restrictions, it said on Wednesday. More than 165,000 people in the industry have lost their jobs since lockdowns started at the end of March last year.

SA has recently banned alcohol sales for the third time as part of efforts to free up space for Covid-19 patients in hospitals burdened with alcohol-related injuries.

Almost 30% of local breweries have been forced to shut their doors permanently and some, including Heineken, have abandoned planned investments.

Heineken employs just under 1,000 full time employees in SA where more than 165,000 people in the industry have lost their jobs since lockdowns started at the end of March.

The company said in a statement in light of the continued market pressure and in line with a global review by its Dutch parent company, it now finds it necessary to restructure its operations to build a business fit for the future.

“Unfortunately, given the ongoing challenging situation the company finds itself in, these measures are no longer adequate to manage and sustain the operating costs of the business.”

The maker of Windhoek and Amstel beer said it will continue to review its cost and organisational structure to ensure “it is fit for the future needs of the business particularly during this tumultuous period”.

In August the brewer dropped plans to build a R6bn brewery in KwaZulu-Natal after the second ban on alcohol sales.

In an e-mailed response to questions the brewer said other new investments will be placed on hold.

Written by Lize Geldenhuis on August 31, 2020. Posted in National News.

Sun International is planning to cut 3,300
jobs in South Africa and Chile as part of a restructuring plan to survive the pandemic, which took the firm into a half-year headline loss of 885 million rand ($53.26 million) on Monday, Reuters reported.

The hotel and casino industry, which counts on international travellers and the sale of alcohol, has been one of the hardest hit by lockdown restrictions imposed from March 27 to curb the spread of the coronavirus.

Properties of the casino and hotel company were forced to close for over three-months in South Africa, while in rest of Africa and Latin America, its operations still remain closed.

Prior to the pandemic management was reviewing employee structures at certain operations as well as the cost base across its South African businesses, it said.

“The COVID-19 pandemic required us to undertake a deeper review as we anticipate that it will take some time for our properties, in particular our hotels and resorts, to recover,” Chief Executive Anthony Leeming said, echoing a sentiment shared by the tourism industry.

The review has resulted in proposed cuts of about 2,300 employees in South Africa, a move that could save up to 280 million rand in employment costs.

The proposed retrenchment exercise will impact the Sun City resort, the Maslow Sandton hotel, the Boardwalk casino and hotel, The Table Bay hotel and Wild Coast resort, the firm said.

In Chile, Sun International has started a voluntary retrenchment process involving about 1,000 people, with 451 employees to date accepting the offer, the firm said.

The firm has also identified cost savings of more than 250 million rand in outsourcing and service provider contracts, IT systems and other areas.

News: SAB halts R5bn investments due to the ban on alcohol.

Written by Lize Geldenhuis on August 4, 2020. Posted in National News.

South African Breweries (SAB) announced on Monday that it had “halted” R5bn in investments in the country over the next two years because of the ban on alcohol sales, TimesLive reported.

The funds, according to the company, were previously scheduled as part of its capital allocation programme for this financial year, while an additional R2.5bn planned expenditure for the next financial year was now under review.

“The cancellation of this planned expenditure is a direct consequence of having lost, as of August 3 2020, 12 full trading weeks, which effectively equates to some 30% of annual production,” said SAB’s finance vice-president, Andrew Murray.

“This decision is a result of the first, and the current, suspension of alcohol sales which has led to significant operating uncertainty for ourselves, our partners, as well as colleagues in the industry, including participants in the entire value chain, and which affects over one million livelihoods across the country,” he said.

According to SAB, the investments that were being considered included upgrades to operating facilities and systems, as well as the installation of new equipment at selected plants.

It said its decision would have an effect on the external supply chain companies that had been selected for these upgrades.

“It is forecast that the jobs lost across the entire industry as a result of the alcohol ban will soon reach 120,000 people and the tax lost from the first ban is sitting at over R12bn,” said SAB.

“The jobs and financial losses magnify considerably when considering the severe impact the suspension is having on communities, as well as the downstream supply chain, including farmers and other raw material suppliers, tavern owners, packaging and logistics companies, among many others that have had to immediately stop operations, and are facing dire consequences.”

Murray added: “As SAB, we are focused on our priority of ensuring the wellbeing and safety of our employees and all members of our communities, and this commitment will remain intact for as long as possible.

“We will continue our attempts at engaging with the South African government to obtain some form of clarity on when we can resume operations.”

SAB said regardless of the decision to cancel capital expenditure, it would continue to implement measures that had a meaningful impact on the health crisis and in support of the country’s much-needed economic recovery.

South Africa’s restaurant sector is on its knees as the coronavirus crisis and stringent lockdown measures threaten the livelihoods of the 800,000 people employed in the industry, Business Insider reported.

While sit-down meals are now allowed in restaurants after a months-long ban, alcohol sales with meals are still out of bounds, starving many restaurants of much-needed income.

The industry was dealt another blow with this week’s reintroduction of a curfew between 21:00 – 04:00.

According to industry representatives, restaurants do the majority of their business after 17:00. If restaurant staff need to be in their homes by 21:00, that means they need time to travel, and to clean and close the restaurant. This effectively cuts restaurants to only two hours of trade, between 17:00 and 19:00.

Restaurants also say they have been let down by insurers like Santam and Guardrisk, who are refusing to pay out business interruption claims.

Many prominent restaurants and bars have now closed their doors permanently, including The Kitchen in Cape Town, where former US first lady Michelle Obama famously had lunch in 2013, popular Melville restaurant Pablo Eggs Go Bar, The Myoga restaurant at The Vineyard hotel in Cape Town,  as well as the Kalk Bay Theatre & Restaurant.

Restaurants are mobilising to focus attention on their plight. The Restaurant Association of South Africa (Rasa) says it may sue government on behalf of its members for damages suffered by lockdown regulations, including a rebate on liquor licences.

According to Business Insider, the industry is also organising a “Million Seats on the Streets” protest, planned for Wednesday 22 July, and it is expected that streets may have to be shut down as restaurant workers plan to demonstrate. A human chain is planned from parliament on July 24th.

A social media campaign – #jobssavelives – has also been launched, and some of South Africa’s top restaurants are posting photos of how many jobs have been lost, or are at risk, due to the lockdown: 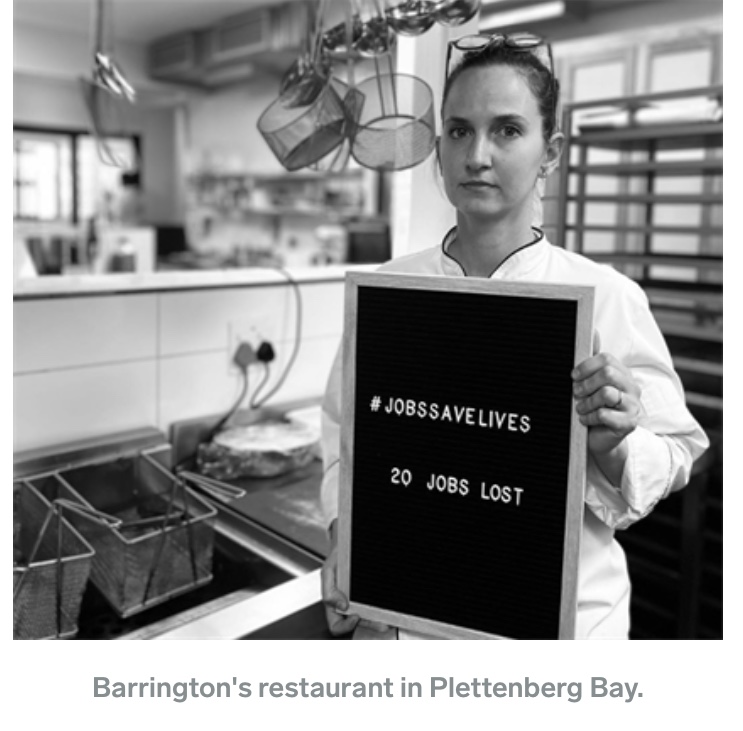 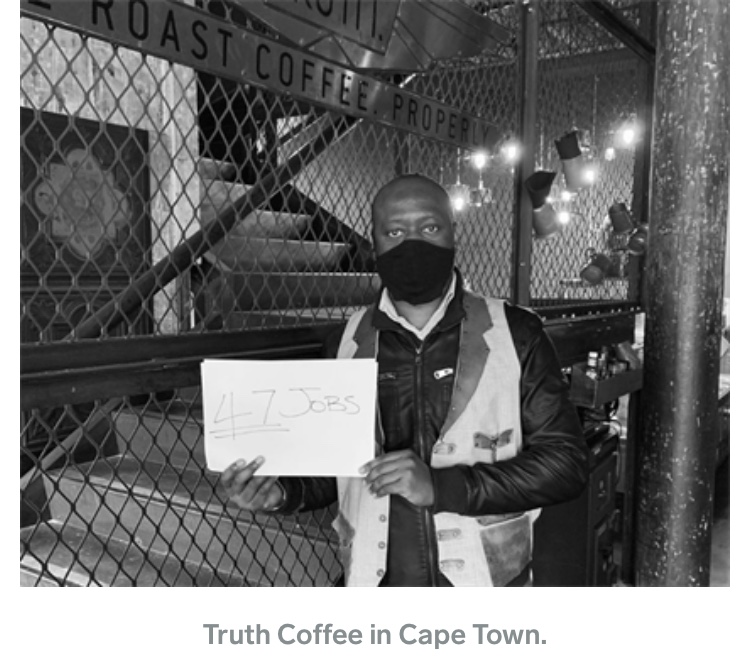 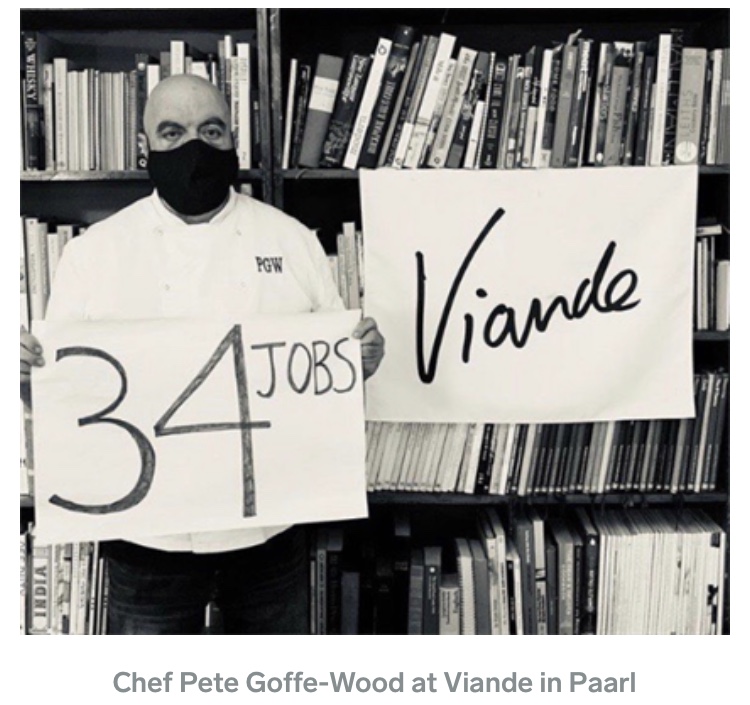 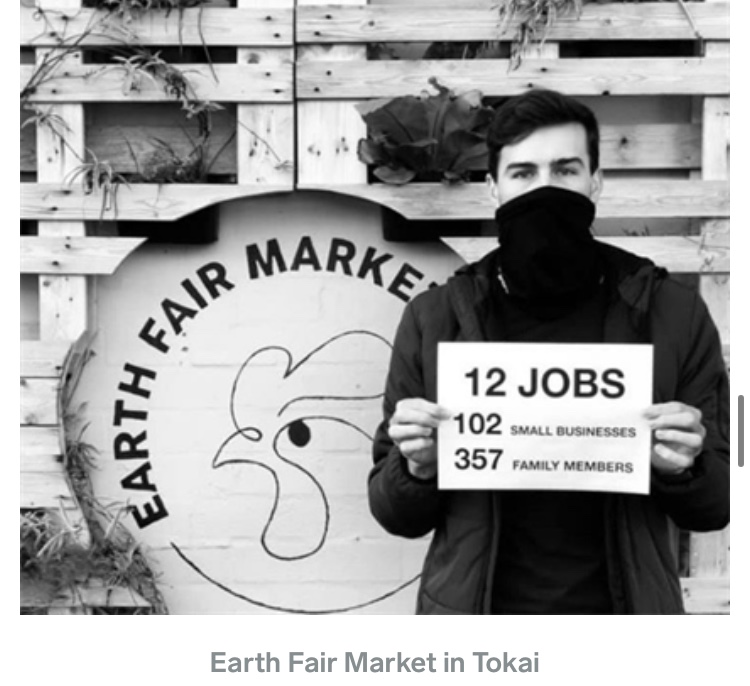 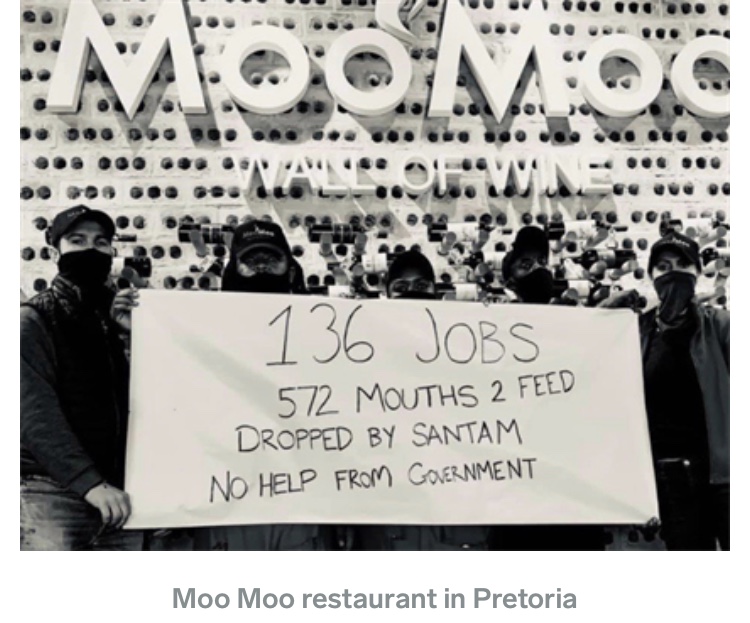 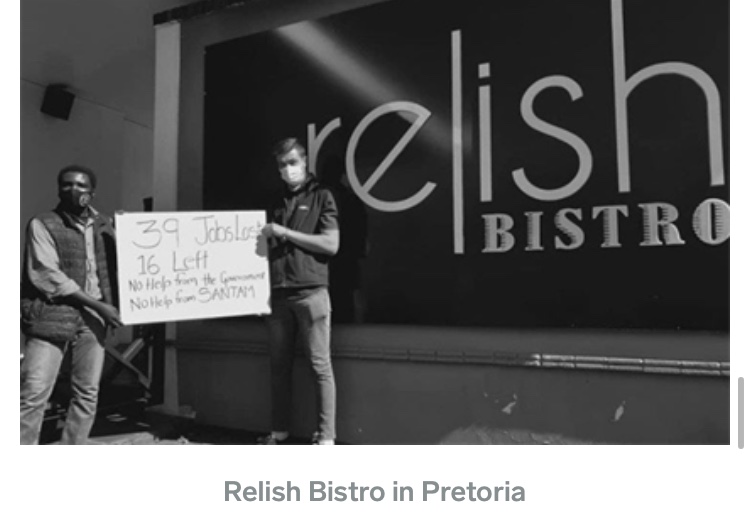 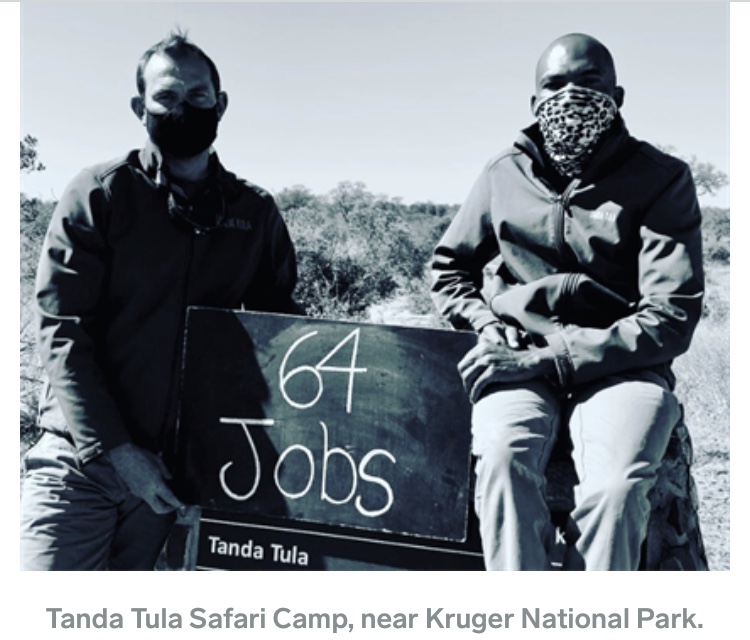 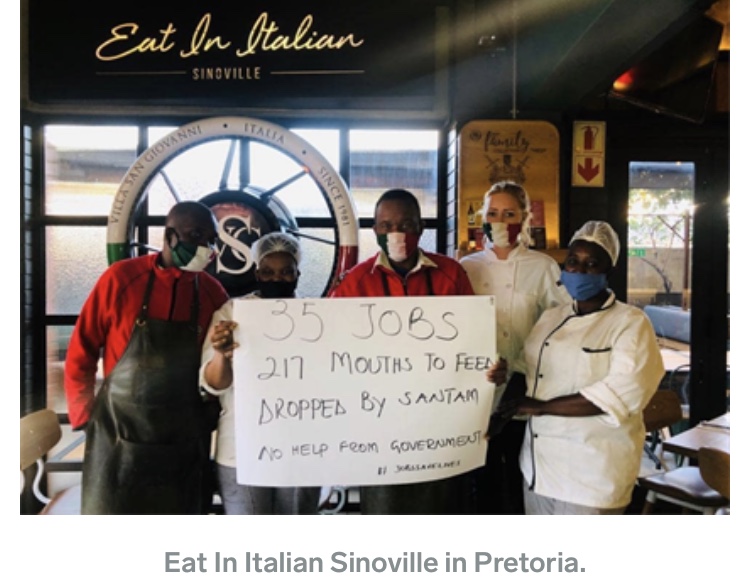 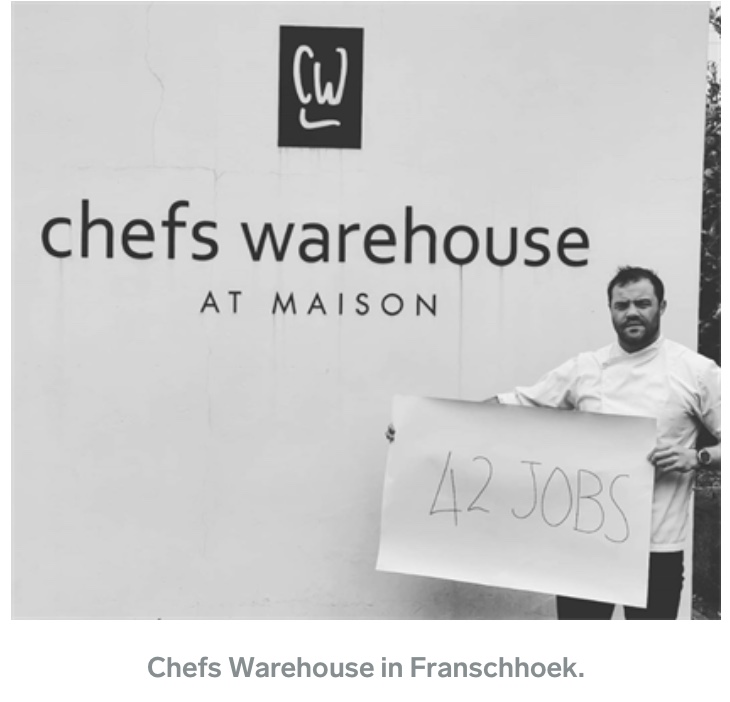 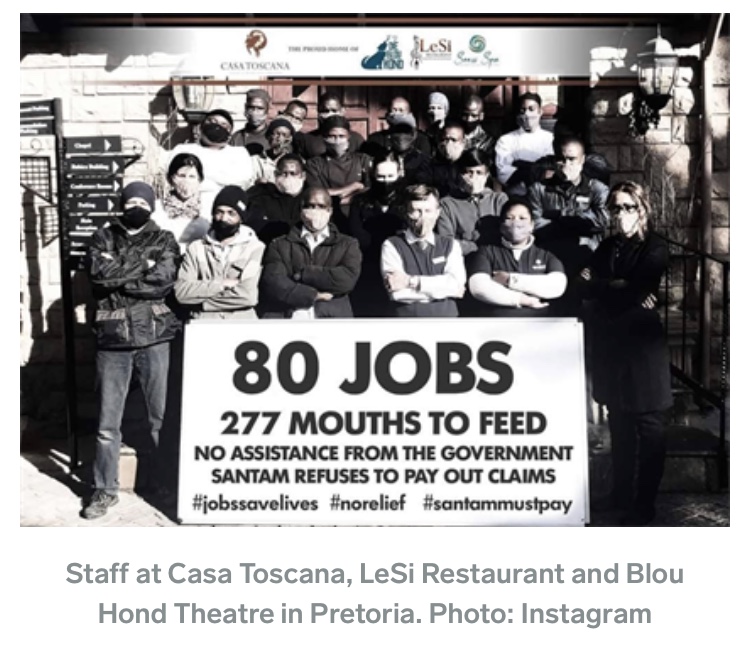 The Massmart Group says it has completed an assessment of opportunities to improve its South African Game store efficiencies and is now looking at possible job cuts.

In a shareholder statement on Tuesday (7 July), the group said that this will include a consultation process in terms of section 189 and section 189A of the Labour Relations Act with organised labour and other relevant stakeholders.

Section 189 of the act governs, among other things, the procedures that companies must be take ahead of any possible retrenchments.

This process may potentially affect 1,800 employees in Game stores in South Africa, it said.

In March, Massmart said that it will close all of its non-performing stores, as cash-strapped consumers battle with high unemployment, modest wage increases and higher average fuel and utility prices.

This included the closure of 23 Dion Wired Stores as well as a number of Masscash stores.

The move marked the first significant act by Massmart’s new chief executive officer, Mitchell Slape, who arrived from Wal-Mart in September with a brief to turn around the retailer.

As of March, Massmart had a total of almost 450 stores across 13 countries in sub-Saharan Africa and about 48,500 full-time employees.

Written by Lize Geldenhuis on July 7, 2020. Posted in National News.

Media24 has just announced it will start consultations with staff about the possible closure of five magazines and two newspapers as well as outsourcing and reducing the frequency of its remaining monthly magazines among other interventions as the Covid-19 pandemic cuts into advertising and circulation.

“The pandemic has accelerated the pre-existing and long-term structural decline in print media, resulting in a devastating impact on our own already fragile print media operations with significant declines in both circulation and advertising since April,” said Ishmet Davidson, the CEO of Media24, in a statement on Tuesday morning.

“For many of our print titles the benefits of prior interventions to offset the structural declines and keep them on the shelf no longer exist and they’ve run out of options in this regard.”

Media24 says the planned interventions are expected to affect around 510 staff members, with a proposed reduction of close on 660 positions out of a total staff complement of 2 971.

In the magazine portfolio, the interventions include plans to:

Media24 says its flagship weeklies Huisgenoot, YOU and Landbouweekblad will continue to be produced and published in-house.

In the group’s newspaper portfolio, it intends to:

The group also intends to reduce staff in its media distribution business as well as in divisional and corporate services departments related to the proposed reduced print media operations.