Man claims to be Prince Charles and Camilla’s child

Written by Lize Geldenhuis on April 29, 2021. Posted in International News. Leave a Comment

A man from Queensland in Australia recently claimed to be the secret son of Prince Charles and Camilla, Duchess of Cornwall and released his correspondence with the royal couple for the first time.

According to reports, Simon Dorante-Day has fought for decades to prove his claims that Charles and Camilla are his biological parents, even taking his battle to the Australian High Court. The 54-year-old grandfather believes he was conceived when the 17-year-old Charles and 18-year-old Camilla were first linked to one another in 1965. He claims that in the lead-up to his birth in April 1966, Camilla disappeared from Britain’s social scene for at least nine months, while Charles was sent to Australia. 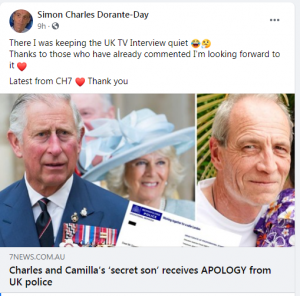 He was later adopted to a family in Portsmouth, England, who had ties to the Queen.

“My grandmother, who had worked for the Queen, told me outright that I was Camilla and Charles’ son many times,” he told 7News.com.au.

Prince Charles and Camilla have never responded to Dorante-Day’s claims. While he has been quite vocal about the situation on social media and interviews over the years, as of recently, Dorante-Day has released his initial letter to Charles and Camilla from 2012, where he raised his paternity claims for the first time.

“The letter below is the one I wrote to the Prince of Wales and the Duchess of Cornwall in 2012,” he said. “I had a family lawyer review the letter – he made no changes. It was hand-delivered by Detective Inspector David Smith of SO14 to Prince Charles Private Secretary, for which I have a receipt, and time of delivery.”

In the letter, he says that he has been looking for his “natural parents” for as long as he can remember, “but in earnest researching and investigating for the last 15 years”.

“This combination of historical research, remembered events and statements, investigation and approaching Government resources continually points in one direction; that of yourselves.”

LOOKING FOR HIS ‘NATURAL PARENTS’

Dorante-Day then went on to outline concerns that his Australian wife, Dr Elvianna Dorante-Day, and children were being targeted over their claims.

“Subsequently, because of these types of incidents, I have also enlisted the assistance of a legal firm who are willing to represent me in this endeavour should this letter prove to be ineffectual,” he wrote at the end.

“Furthermore, I am also aware that as I was adopted there is a legislative obligation for me to give my consent to my natural parents for them to contact me. Given this opportunity in an informed manner, I would gladly give my consent. I know that my story sounds unbelievable, but everything I say is checkable – if you don’t believe it, check it,” he said.

“I’m simply a man looking for my biological parents, and every road has led me back Camilla and Charles. I’m not in this for money or for a title – I simply want to know who my parents are.”

He went on to share the following photo of his son and the Queen to make his case: 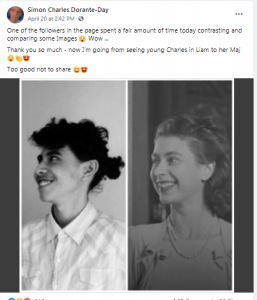