Eskom announced that Stage 2 load shedding would be implemented from 10:00 until midnight on Wednesday, 22 June, in a statement less than an hour before the power cuts are expected to start.

Four generating units broke down on Wednesday morning, according to the power supplier, which means the capacity constraints are worsened.

Stage 2 load shedding will be in place for even longer from Thursday – starting at 5:00 until midnight. It will remain that way until Sunday night.

“There is a likelihood that the stage of load shedding might need to be increased during the evening peaks,” warned Eskom.

A generation unit each at Kendal and Matimba Power Stations went down on Wednesday while two units broke at Matla.

The breakdowns resulted in a capacity loss of 2400MW, said Eskom. The capacity constraints are also worsened by a delay in returning to service a unit a Kusile Power Station – it is expected to return tomorrow.

“Eskom cautions the public that as the shortage of generation capacity persists, the system will continue to be constrained with an elevated risk of load shedding over the coming weeks.” 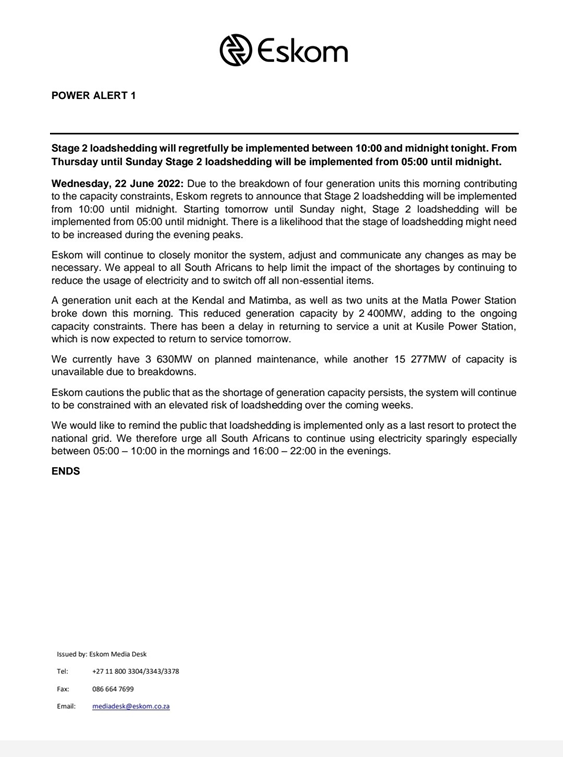 Hot weather over South Africa due to Tropical cyclone

Why the Health Dept says mask-wearing will remain… for now

Risks of disaster at Ukraine nuclear plant increasing ‘every day’

South Africa is days away from a National Shutdown

SA Banks selective in how they treat clients, analyst says

Two big changes in the planned school calendar for 2025

Huge changes for passports in SA – here’s what to expect…

Olivia Newton-John to get a state memorial in Australia