Residents on Mpye Street in Thokoza, Ekurhuleni, do not have the pleasure of breathing clean fresh air and have endured the pain of living in a stinking area for more than 10 years.

The area is constantly filled with dirty water, faeces and toilet paper coming out of the sewerage pipes and reporting this is not helping at all.  The residents say they have reported the problem to the relevant authorities on countless occasions, without any long-term solution.

In elections past, they have been given many promises that their problem will be resolved – but only if they vote for the right person.

Since the announcement of the local government election date, many residents have again listened with disbelief to endless promises of clean water, dignified sanitation, and the development and maintenance of sewerage infrastructure.

After the 2016 municipal elections, the ANC formed a coalition government with the African Independent Congress, the Pan Africanist Congress of Azania, the Patriotic Alliance and the Independent Ratepayers Association of SA to keep control of the Ekurhuleni Metropolitan Municipality.

One resident, Tumi Montoedi, said that nothing happens after elections – even the ward councillors disappear.

This is a common problem experienced by many residents in the region.

“There’s no door we haven’t knocked on to have this problem solved. From the council to the municipal offices and the provincial department of [human settlements], water and sanitation – no one has helped” Tumi Montoedi said.

Montoedi said they stopped using their toilet because it does not flush, but spills its contents out into the house instead.

“There’s no door we haven’t knocked on to have this problem solved. From the council to the municipal offices and the provincial department of [human settlements], water and sanitation – no one has helped,” he said.

Montoedi said the ward councillor had since stopped taking their calls.

“When he walks around our area, it’s like everything is fine,” he said.

In ward 56, residents find themselves giving the street a wide berth to avoid being splashed by sewage as cars pass through.

“The problem of sewage is our daily life. I had to buy plumbing pipes and get people to install them so that they could move the dirty water and sh*t out of my yard. This at my own expense” Jabulani Nxumalo said

Residents say they have been having sewage problems for more than two months and only this week saw personnel with equipment moving into the area to fix it.

Jabulani Nxumalo, a resident of ward 54, said service delivery had been a let-down.

“The problem of sewage is our daily life. I had to buy plumbing pipes and get people to install them so that they could move the dirty water and sh*t out of my yard. This at my own expense,” he said.

Nxumalo said they had been lied to too many times by people who only want their vote during elections.

He said one of his neighbours’ houses was always filled with dirt coming out of the drainage system.

According to Nxumalo, the sewage problem is caused by too much pressure on the wastewater system because of overpopulation.

“They told us that the sewerage pipes have no capacity to cater for the whole community because when it was designed during the apartheid era the community still had fewer than 500 000 people,” he said.

Nxumalo also said the community did not trust politicians who seek to score votes by making empty promises. Residents have vowed that they will turn back any politician who comes knocking on their doors, canvassing for votes.

The longest time that the residents spent without experiencing a blocked sewer was three weeks.

“People are unhappy with the sewage problems and the bucket toilets, which sometimes go for two weeks without being removed” Norman Thompson said

A stone’s throw away, in Basothong Section in Thokoza, residents have vowed not to allow door-to-door campaigning from politicians, arguing that they have been promised service delivery before but nothing ever happens. 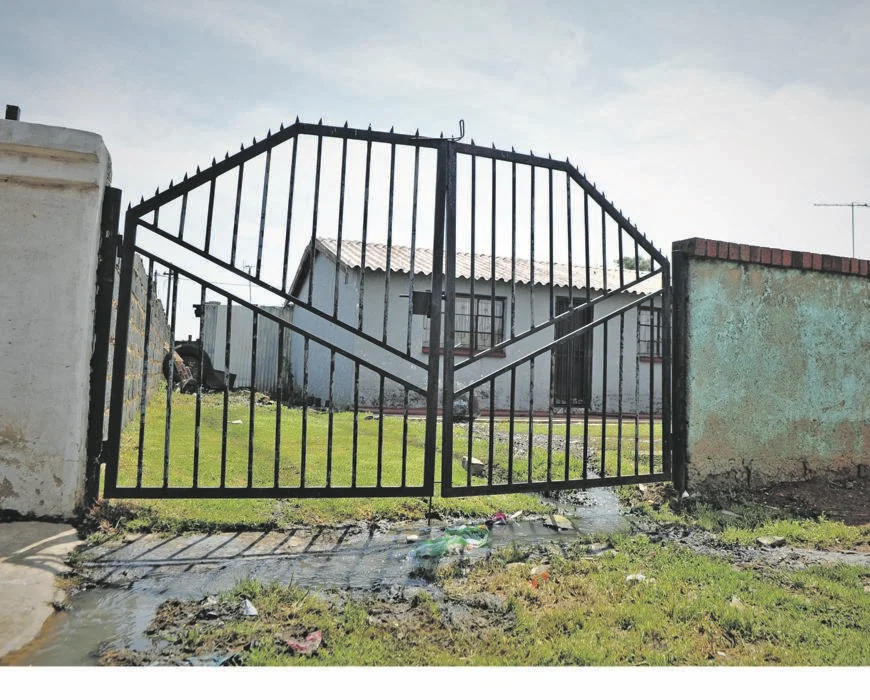 Norman Thompson, a community leader in Basothong Section, said many residents built their houses along the drainage line and always experience problems during the rainy season.

“People are unhappy with the sewage problems and the bucket toilets, which sometimes go for two weeks without being removed. Some residents decried that they had had to hire local guys to bring disinfectant and other chemicals to minimise the smell,” he said.

Thompson said the roads in the area were badly damaged, but no one cared to fix them.

“Our streets are full of potholes that need serious attention,” he said.

A deserted multimillion-rand licensing hub project in ward 56, which was not completed amid allegations that the money allocated for the project had gone missing, is being used for illegal dumping, and the community fears that it will bring rodents and disease.

The residents also complain about electricity.

In Kaalfontein, about three sections have been in the dark for more than six months. This was after their transformers were reported to have exploded in about May. According to residents, Eskom brought officials to investigate the problem, but left the area, claiming that they were threatened by communities.

“There is an element of vigilantism from leaders who always try to shut down our concerns” one of the residence said.

Some residents said they were scared to raise their concerns because leaders have politicised problems and instilled fear in those who voice their views.

“There is an element of vigilantism from leaders who always try to shut down our concerns,” said one community member.

In Eden Park, which has a number of RDP houses, many residents complain about homes that were given to allegedly undeserving people.

Students bring JHB to a standstill

What the Children’s Justice Act says about bullying